This article is intended for young kids (or the young at heart). We will discuss Lucy and her mission and then do some basic experiments with play-dough so your budding scientists can get hands on. 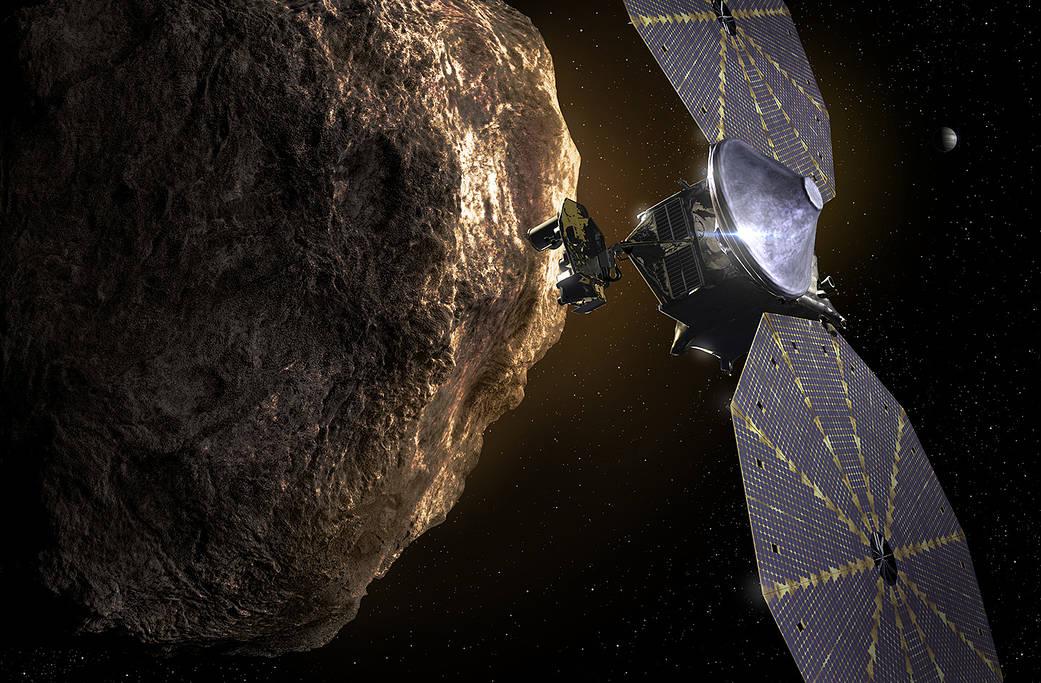 Lucy is a space probe created by NASA to study asteroids. She will visit one asteroid in the inner asteroid belt that exists between Mars and Jupiter and seven asteroids trapped in the same orbit as Jupiter. The asteroids the share Jupiter’s orbit are called Trojans. These asteroids don’t orbit Jupiter like the Moon orbits the Earth. Instead, they follow the same path around the Sun as Jupiter. 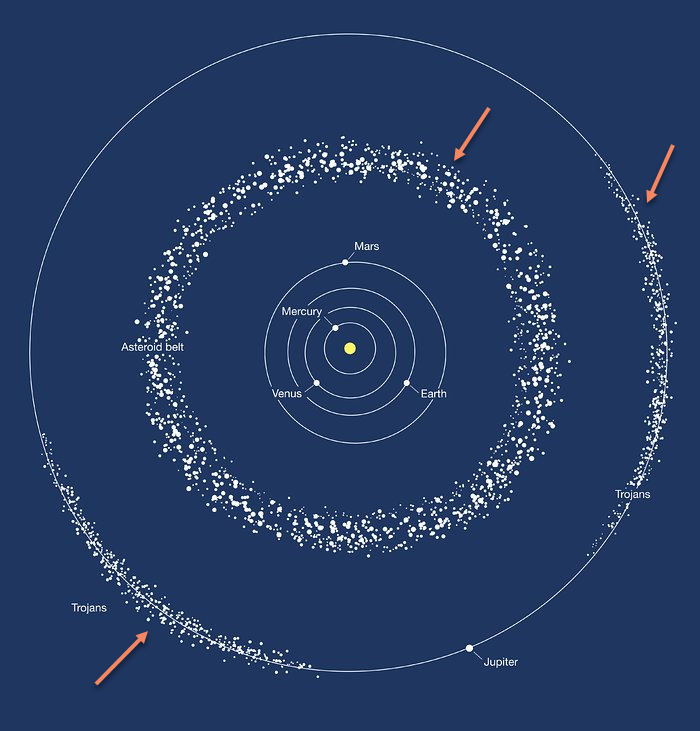 Why is this mission important?
Lucy mission is a long one taking 12 years to get to her final destination. So why is this mission important and why should we care about it? First, there have been no other missions to study the asteroids near Jupiter. And why are those asteroids important? Because studying them is like going back in time. We can look at some of the original
building blocks of our Solar System. Discoveries around the age of the asteroids and their make up will answer a lot of questions about our universe.

Second, it is pretty cool. Lucy will need to circle back near Earth multiple times to get a gravity assist bump. No other space probe has ever done this. Previous probes either went in a fairly straight line to their destinations or used the assist of another celestial body to change directions. Lucy’s path isn’t straight so we need to circle the Earth in order to
head off in completely new directions. There is a really cool animation of that path available here. Lucy is the magenta line being drawn on the diagram.

If all that isn’t cool enough, Lucy has two large Solar Panels which will keep her charged during her mission. She also has really interesting tools like a camera system similar to the steady camera technology used in making movies here on earth. Lucy has to be able to take steady pictures while flying at 39,000 miles an hour.

Experiment 1:
Before we get started, none of these experiments are to scale and are not meant to be 100% accurate to every detail. We are trying to simplify the science, have fun and get the general concepts of this mission.

Now we are going to do some science on our own. For this first experiment you need 3 different play-dough colors. The more distinct your colors, the better. For our example we choose pink, blue and white. 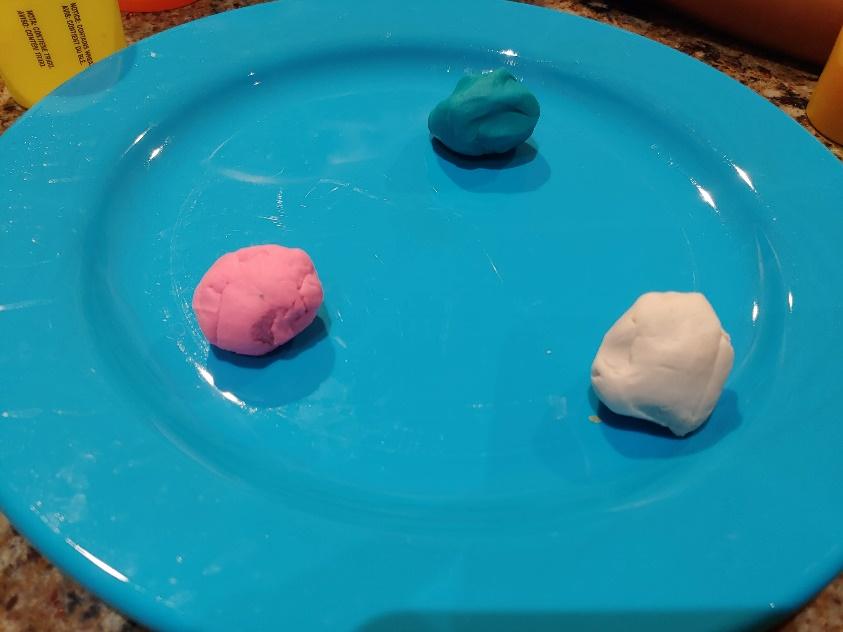 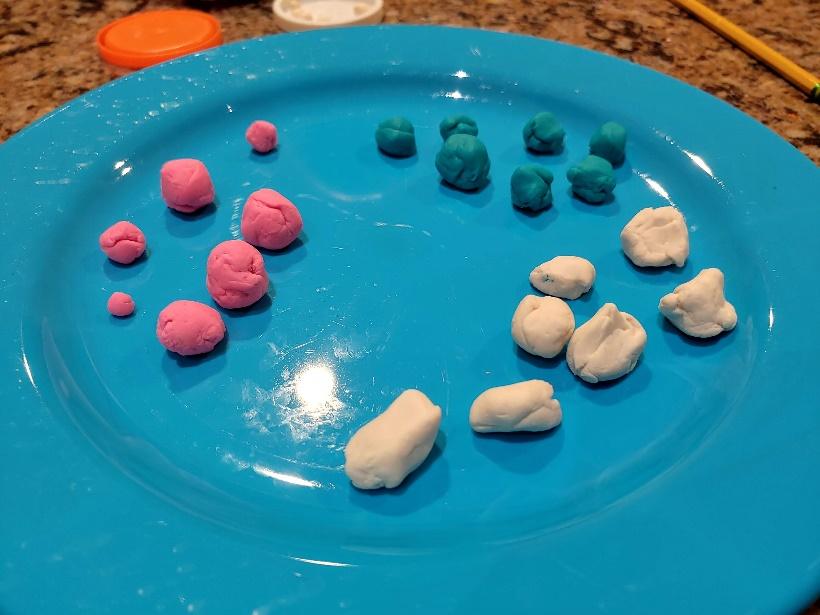 Now take 16 of the playdough balls and set them to side. Yes, we are getting some math in here for your kids. An important thing here is to leave at least 1 play-dough ball of each color behind. 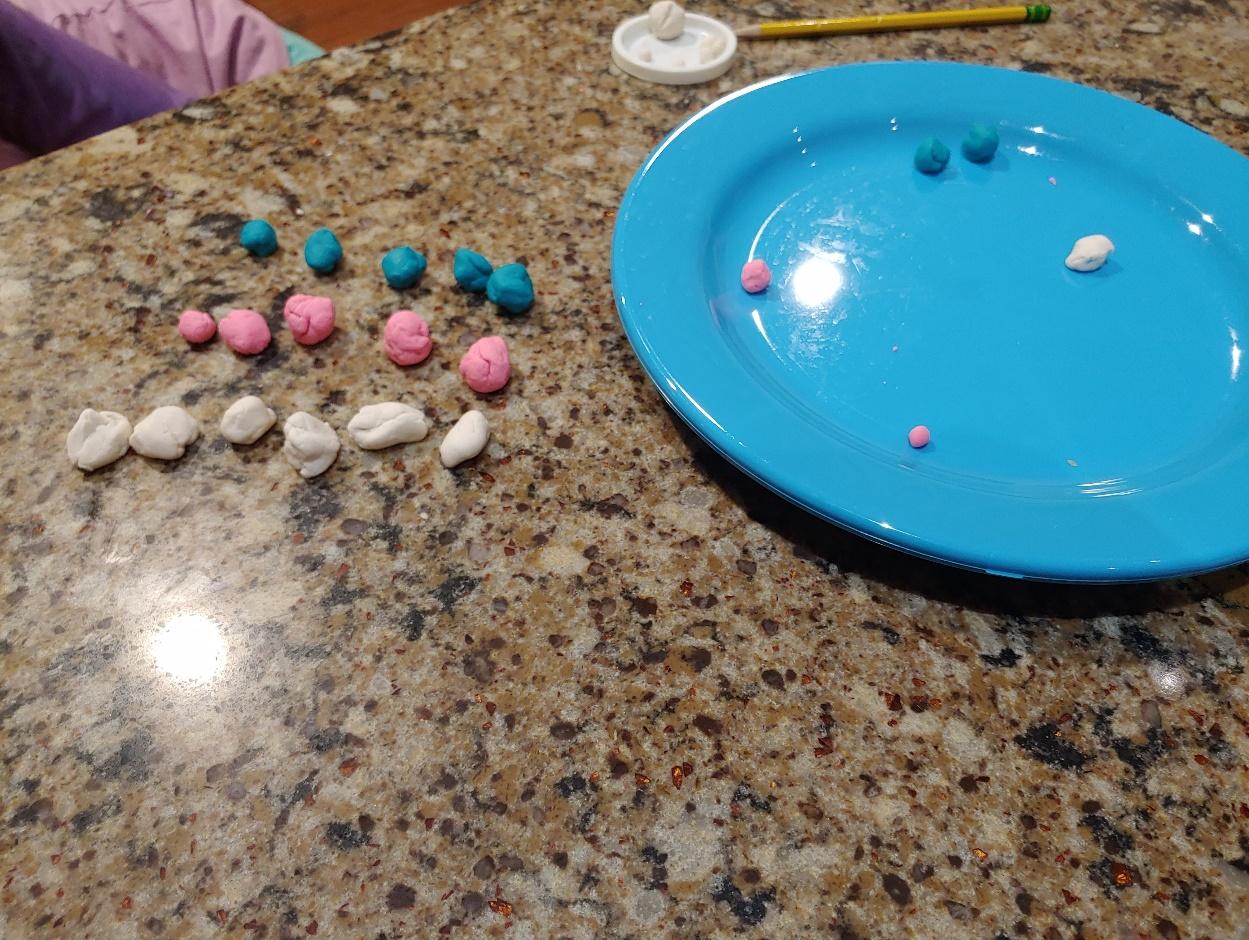 Take your 16 balls and smush them together. You want to mix the colors up until you get a nice swirl. Then roll it up into a ball. 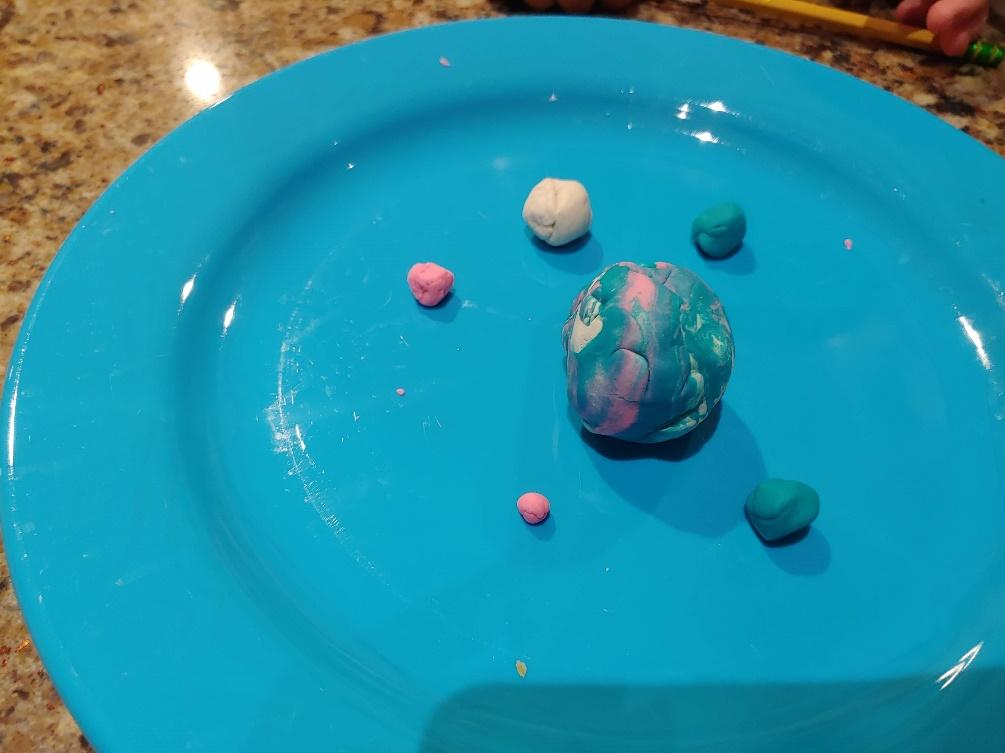 What about those remaining playdough shapes? Those are the asteroids that didn’t get smushed together to become a planet or moon. Looking at them, you can see the original building blocks of our planet. You could study the makeup of those asteroids like what elements are they? Iron? Nitrogen? Carbon? You could see how old they are by seeing how hard the play-dough has become. This is just like Lucy will try to date how old the real asteroids are.

Experiment 2:
Now we will look how cool Lucy’s flight path is. You will need play-dough, a piece of paper and a pen.

You need to make a planet Jupiter and planet Earth out of the playdough. You can use whatever colors you want we choose orange and blue respectively. Next you need a Lucy space probe, we made a little white roundish object. Lastly, you need asteroids again. You can use your leftovers from the last experiment or make new ones.

Now, on the piece of paper draw a partial circle for Jupiter’s orbit. Place Jupiter in the center of the orbit. Place the asteroids on the either side of Jupiter along the orbit line and label them. Lastly, place Earth below and label it. 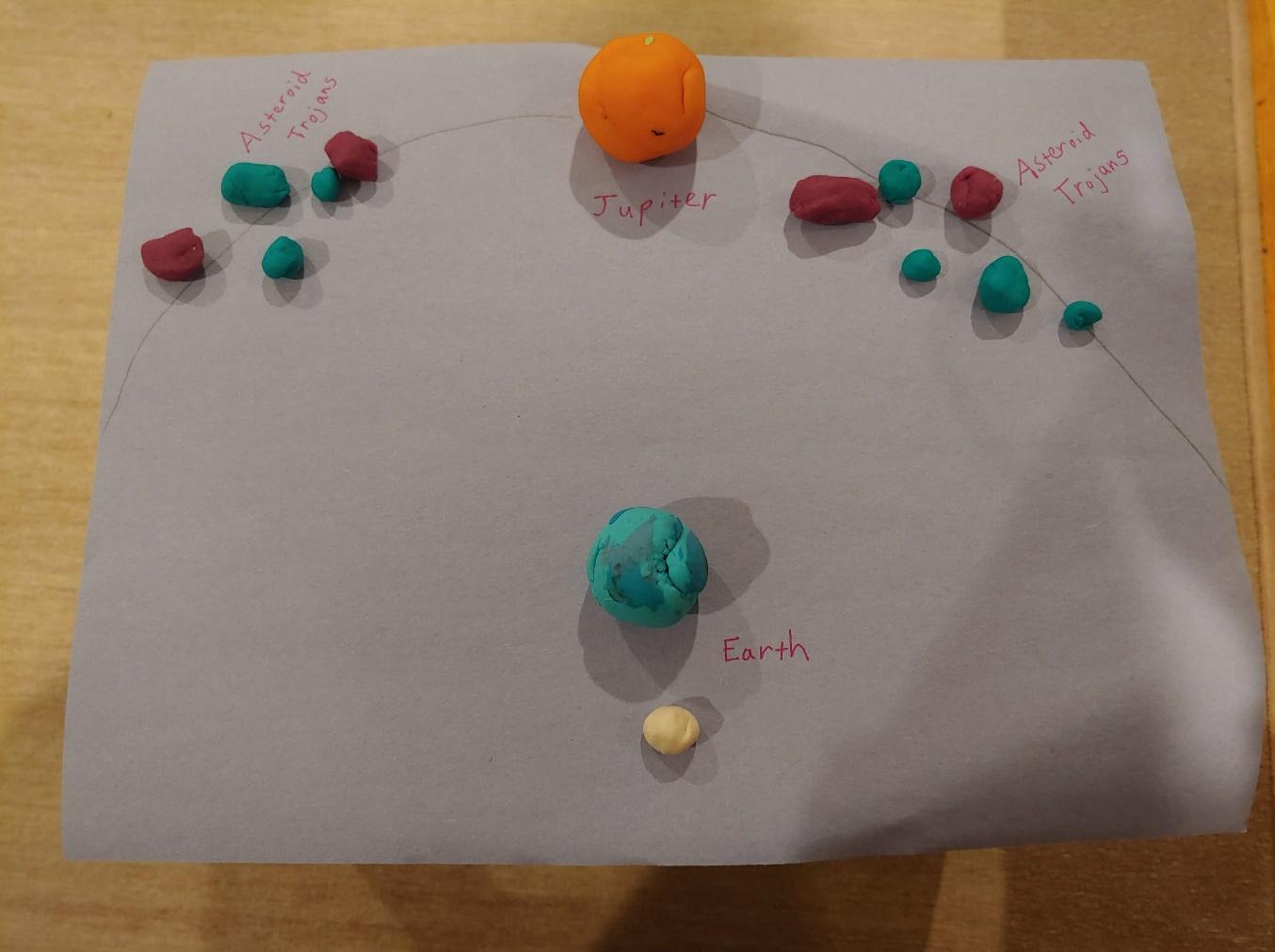 Now we want the move Lucy around her flight path. She will go around the Earth and up to one set of asteroids, before circling around back to Earth and heading to the other asteroid group. The video will show an example of this would look. Let your child practice and play with Lucy’s flight plan.

Optional Extra:
For an extra fun thing to do, write down what you think scientists will learn about the asteroids. How old do you think they are? What are they made of? Any other discoveries you think will happen. Save the paper and look at it in a few years when start getting data back from Lucy. How accurate of a scientist were you?

The January Monthly Meeting will be held on January 27 in the Roy Smith Theatre at 8:00 pm on the campus of Union College. There will be a guest speaker. This is open to the public.